20 Year Anniversary of the Violence Against Women Act

On September 13, 1994, Congress passed a groundbreaking law called the Violence Against Women Act. Why was it such a game-changer? Because it finally put the full force of the federal government into efforts to stop domestic violence and help victims. Not only did it reshape our criminal justice system, and introduce training for judges and law enforcement, it provided the funds for a national network of shelters, services and supports.

In fact, we’re proud to say that domestic violence against adult women has declined 64 percent in the past 20 years since the law was passed. 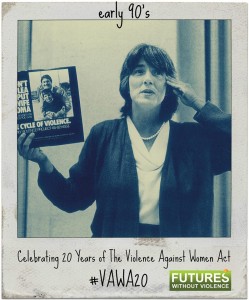 -Esta Soler, Founder and President of Future Without Violence

We’re grateful to then-Senator Joe Biden for nurturing and introducing the bill in the 1990s.  It’s also worth noting that President Bill Clinton, who signed the bill into law, was among the first public figures to expose the issue when he shared a personal story at the Democratic convention.