Is the International Violence Against Women Act the solution?

Over the past week, an appalling story has been making the rounds about two young sisters in rural India sentenced by an all-male village council to be gang raped and publicly humiliated.

While the details of the incident are cloudy at best, and have been contested by the village council, what we know for sure is that these incidents happen on a daily basis across the globe. They happen in Nigeria. In Afghanistan.  In Iran.  And yes, in India.

One out of every three women globally will be beaten, coerced into sex, or otherwise abused in her lifetime.

In some countries, the statistics are even bleaker. In many countries, sexual violence against women and girls is often used as a form of control and coercion. While rape as a form of punishment may not be condoned by governments, small ‘courts’—often composed of un-elected men governing over the lives of citizens in small  villages—can dole out verdicts and punishments with little oversight. There is little recourse from law enforcement as well, who have been known to turn a blind eye to these human rights violations and injustices.

So, what’s the solution?

We wholeheartedly believe that the International Violence Against Women Act (IVAWA) would help combat these type of atrocities across the globe by working from the top-down to change the law of the land, and the bottom-up to change social norms that perpetuate gender-based violence. 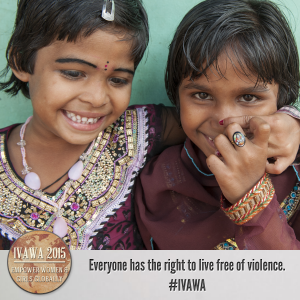 In addition to creating and enforcing laws at a high level, IVAWA also calls for cooperation, coordination, and collaboration with a wide variety of non-governmental partners to aid in the prevention of violence against women and children.

The bill recognizes the important role that community leaders, faith-based organizations, and village elders play in the prevention of violence at a grassroots level. These are the individuals the community turns to for guidance and advice, and they can be a significant catalyst for change. In countries that lack effective legal frameworks to address gender-based violence, it is these elders and community leaders whom have the standing and authority to address and reverse these harmful practices.

But these numbers are far below the count we need to pass this life-saving bill.

If we are dismayed, alarmed, and shocked at stories of violence perpetrated against women and girls around the world, then we must pass the type of legislation that will create long-term, sustainable change.

Now’s the time to ask your members of Congress to support and pass IVAWA, and invest in solutions that will prevent these senseless atrocities against women and girls.