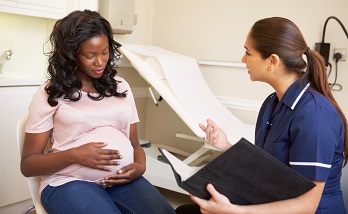 Womens’ doctors should be on the lookout for patients whose partners are unduly pressuring them to become pregnant — or even sabotaging their efforts to use contraception.

That’s the advice from the American College of Obstetricians and Gynecologists, which just published recommendations for doctors about reproductive and sexual coercion.

The terms cover interference with contraceptive use, such as destroying birth control pills or poking holes in a condom, and behavior intended to pressure someone into having sex but that stops short of physical force.

A 2010 survey from the Centers for Disease Control and Prevention found that about 4.8 percent of women in the U.S. reported having had an intimate partner who tried to get them pregnant against their wishes or to stop them from using birth control.

ACOG recommends that OB-GYNs routinely screen women and adolescents for coercion at annual exams and during prenatal and postpartum visits. Doctors can help affected patients conceal contraceptive methods, such as giving birth control pills in a plain envelope or using a copper IUD with the strings trimmed to prevent detection, the group says.

The committee also recommends that doctors put educational materials on coercion in plain view in places such as office bathrooms and exam rooms. And doctors should see the patient alone for at least part of the visit so she can speak freely.

While ACOG’s recommendations are aimed at doctors who treat women, men can also be subject to pressure. About 8.7 percent of men reported having a partner who tried to get pregnant against their wishes or to stop them from using contraception, the CDC survey found.

A study conducted by Guttmacher Institute researcher Ann Moore and colleagues found that women with a history of intimate partner violence or sexual abuse seem to be at much higher risk for coercion. In the study, 53 of 71 such women reported male reproductive control.

“We found men coerced women to become pregnant and then denied paternity or men refused to use contraception and then demanded the woman have an abortion,” she says. “It’s not necessarily about the outcome, but about the control.”

She says in addition to the screening opportunities cited by ACOG, screening women at the time of abortion is also a good tactic for identifying victims of reproductive coercion, since multiple abortions may be a sign that a woman is facing this kind of pressure.

ACOG’s committee opinion was published in the February issue of Obstetrics & Gynecology.

Webinar on how advocates and support survivors in enrolling in healthcare during open enrollment - and all year long!
Learn More
Webinar

Webinar on how advocates and support survivors in enrolling in healthcare during open enrollment - and all year long!
Learn More
Blog

Cross-posted with permission from the National Indigenous Women’s Resource Center.

In recognition of the 2022 National Week of Action …