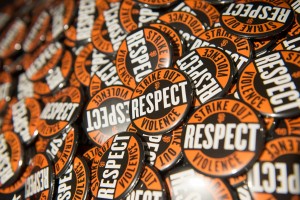 For almost 20 years, the San Francisco Giants have held an annual Strike Out Violence game day.

Futures Without Violence, is proud to stand alongside a Major League Baseball team that is a true leader amongst their peers.

This past Strike Out Violence Day (Sept. 18, 2016), FUTURES and the Giants came together to acknowledge the disturbing intersection of sexual assault and social media in high schools all over the country, as depicted in the powerful Netflix original documentary, Audrie & Daisy.  We hosted the courageous families of Audrie Pott and Daisy Coleman, the two young women featured in the film and gathered, as we do each year, to celebrate coaches, leaders, advocates, and athletes who believe in solutions.

At a VIP brunch supported by the Nancy Eccles and Howard M. Hayward Family Foundation, Wendy Hayward and Rich Wendling and the SF Giants Community Fund, we honored the families of Audrie Pott and Daisy Coleman, two teenage girls from different parts of the country, who were sexually assa 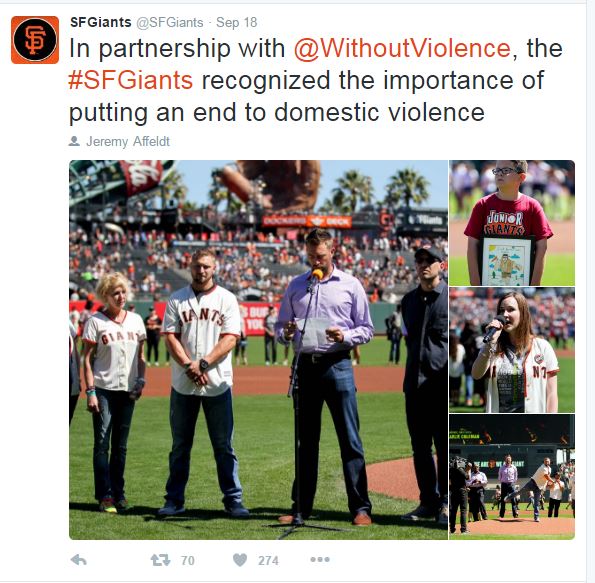 ulted by high school athletes that they believed were their friends. Our friends, filmmakers Bonni Cohen and Jon Shenk have made a beautiful film, and we’re proud to have created the Discussion Guide and Lesson Plans that empower parents and teachers to enter into this critical conversation with young people.

Jeremy Affeldt spoke passionately about the responsibility of pro athletes, and introduced Daisy’s inspiring brother Charlie, who spoke emotionally about the impact of his sister’s sexual assault on his family. After being presented with a personalized Giants jersey, Jeremy Affeldt and Vida Blue escorted Charlie to the mound, where he threw out the first pitch.

In a stadium filled with fans, the Pott and Coleman families took their place behind home plate, and we all shared a moment of silence in honor of Audrie Pott, who lost her life almost four years to the day.

Programs like Coaching Boys Into Men, in concert with films like Audrie & Daisy, and days like Strike Out Violence have the potential to improve and save lives one locker room, one school, and one community at a time. FUTURES is so proud to partner with the Giants in a true demonstration of leadership in professional sports.