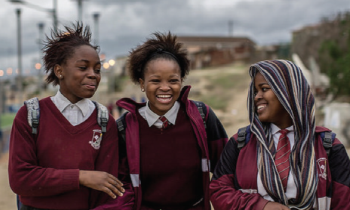 UPDATE (October 2017): Congress has passed the Women, Peace, and Security Act! We celebrate that women will have a stronger presence at negotiating tables, greater opportunities to prevent conflict, increased protections from violence, and better access to resources during post-conflict reconstruction. Thank you to all who supported this critical legislation!

When women are present as peace builders, politicians, and activists, they are often in the strongest position to bring about peace in their communities. However, from 1992 to 2011 only 9 percent of negotiators at peace table were women, and while the percentage of women in parliament has nearly doubled in the last 20 years this only translates into 22 percent of women in parliament today.

Research and experience increasingly confirm that peace agreements succeed only when they include a broad range of stakeholders, especially women, in the process. Unfortunately, women and girls also bear the brunt of many of the harmful consequences of armed violence. In the last two decades, the use of violence against women and girls during conflicts, and especially sexual violence, has become more visible.

The Women, Peace, and Security (WPS) Act is legislation introduced in the 113th and now in 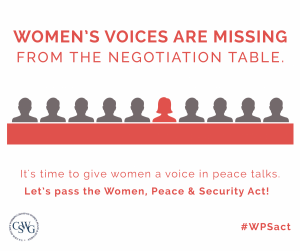 the 114th Congress to promote women’s meaningful inclusion and participation in peace and security processes in order to prevent, mitigate, or resolve violent conflict.  This bill would codify and ensure robust implementation of and give congressional oversight to current U.S. policy, contained in the U.S.NAP on Women, Peace, and Security.

As a member of the US Civil Society Working Group on Women, Peace and Security,  FUTURES is one of the leading proponents of the WPS Act and is working closely with other civil society groups, advocates and law makers to support the passage of this critical Act. The passing of the WPS Act is essential for elevating women in the peace-building process.