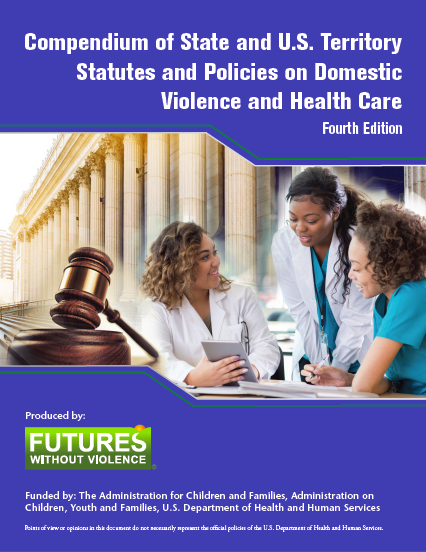 The Compendium is an at-a-glance summary of state and U.S. territory laws, regulations, and other activities relevant to addressing domestic violence in health care settings. It includes analyses and themes that reflect policy and programmatic changes made in the last two decades by leaders in the fields of health care, policy and domestic/sexual violence advocacy. FUTURES invited staff from every state and territory department of health and/domestic violence coalition to review their respective summary and provide feedback; the Compendium reflects these comments. While some states/territories reported on sexual assault policies and programs, this compendium is not an exhaustive review of health policies and programs that relate to sexual assault. Additionally, policies change quickly and may have changed since we invited feedback from the field. If there has been a change or an omission on our part please let us know by emailing health@futureswithoutviolence.org. Relevant state and territory laws were researched to ensure correct citations through both state legislative web pages and LexisNexus.

Download the PDF and view other resources on our online store now!