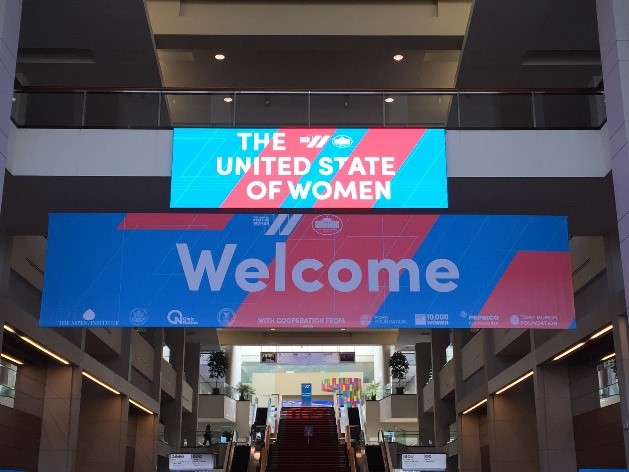 Earlier this month, the United State of Women Summit, convened by the White House, was held at the convention center in Washington D.C. The purpose of the Summit was to celebrate the progress we have made as a country, and collectively turn our focus to the future and all that  is  ahead if we’re to achieve true gender equality.

From early morning, hundreds of women lined up outside to enter the day-long event, the first of its kind. I was one of those lucky women who had the privilege to be part of such a momentous occasion. Armed with my computer, two phones and a camera, I was ready to document the historic event while secretly hoping to bump into Oprah.

Once inside, exhibitors varying from federal organizations like USAID, to nonprofits such as  End Rape on Campus, welcomed attendees with their colorful displays and energetic smiles. After registration, I quickly made my way into the Main Hall, where thousands of women and some men were exchanging greetings, taking selfies, and engaging in lively conversations to the beat of Beyoncé’s “Who Run the World (Girls),” which was blasting in the background. The energy in the room was contagious and it felt like I was in an empowerment pep rally, where women in the room and all over the world were being celebrated.

Vice President Joe Biden was one of the first in a list of high-profile speakers. He delivered a powerful speech reaffirming his support for sexual assault survivors:

“Sex without consent is rape. And if you can’t consent because you are unconscious, it is still RAPE,” the Vice President said. 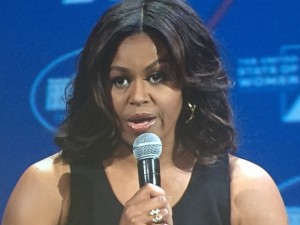 Throughout the course of the day, we heard poignant and powerful stories from survivors like Meghan Yap and Jessica Davidson, both sexual assault survivors whose strength, bravery and sharing of painful experiences truly moved me. Another highlight was the conversation between the First Lady, Michelle Obama and Oprah. Listening to the First Lady talk was particularly powerful: “Our first job in life as women is to get to know ourselves, she said. “ And I think a lot of times we don’t do that. We spend our time pleasing, satisfying, looking into the world to define who we are.”

Listening to one of our most powerful women in our country echo this message was a great source of inspiration and hope for the future. As we move forward with solutions, we must not forget that men and boys need to be included in the conversation—we need them as allies if we are to eradicate gender-based violence.

In the words echoed throughout the day, let’s remember that “When women succeed, America succeeds.”