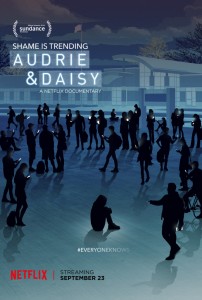 When the documentary, “Audrie & Daisy” (now available for streaming on Netflix), debuted at the Sundance Festival, the standing-room-only audience was overwhelmed by a startling realization. Sexual assault is not only an epidemic on college campuses, but is fast becoming a sad reality in high schools all over the country.

The compelling documentary features two teenage girls – in different parts of the country – who were sexually assaulted by boys they thought were friends. Both incidents involved dangerous amounts of alcohol, followed by sexual assaults that were documented on cell phones, and shared widely among fellow students through social media.

While the outcomes for Audrie and Daisy are quite different, the film takes a hard look at America’s teenagers who are navigating an increasingly complicated sexual culture and coming of age in the world of social media, where everything is documented and shared.

TAKE ACTION
Filmmakers Bonni Cohen and Jon Shenk have been working with FUTURES since the inception of their project to ensure that the film be accompanied by relevant, solution-oriented tools that support survivors and promote strategies for building healthy relationships. Joined by a talented team at Blueshift Education, we’ve created content that expands the conversation beyond the film, and we encourage community screenings across the country. In addition to a discussion guide for general audiences, we’ve prepared lesson plans for teachers that feature film clips and encourage further discussion in classrooms and communities.

FUTURES is also advancing a national policy agenda designed to increase funding and support for programs and initiatives that ensure the safety of our teens by promoting healthy relationships and responsible digital citizenship.

For more information on getting involved or to host a community screening, visit www.audrieanddaisy.com/take-action.