Leveraging Social Media to Talk to Teens About Dating Violence 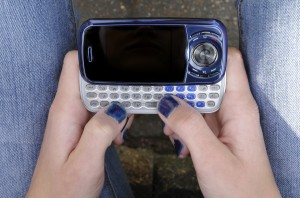 It can be tough to talk about dating abuse—especially if you’re trying to reach teens themselves.

Here at FUTURES, we have a number of programs that strive to prevent teen dating violence early. That’s Not Cool is one of them—it’s an innovative initiative that seeks to raise awareness about the issue, and get teens involved with spreading the word.

February is Teen Dating Violence Awareness month, which serves as the perfect platform for facilitating open and honest conversations about the topic. The trouble is that ‘Teen Dating Violence Awareness and Month’ is a mouthful, and can obscure the issue, making it seem complex and intimidating to teenagers. It’s easy for teens to think of dating abuse as an issue that doesn’t apply to them, that they don’t understand, or that is boring.

Social media is great way to engage teens in the issue. Here are a few tips from That’s Not Cool for organizing and activating young people around the issue of teen dating violence!

Dating Violence is an abstract concept for teens today. Most aren’t even dating in the traditional sense of the word. Our graphic Callout Cards use irreverent, pithy language and humorous images to describe specific instances of dating abuse, in language that teens can relate to. For Teen Dating Violence Awareness Month, we created a line of Valentine’s Day-themed Callout Cards that highlight healthy and unhealthy relationship behaviors. Teens can download these images and share them on the social media platform of their choice.

To infuse some light heartedness into That’s Not Cool, we created a Tumblr called Nope – That’s Not Cool. The tone is intentionally cheeky to relate to teens, and utilizes a variety of GIFs and memes—two popular forms of visual media among young people. Our Tumblr posts feature specific instances and examples of dating abuse—such as over-texting and nude picture pressure—while simultaneously highlighting the humor and absurdity of the negative behavior in question. 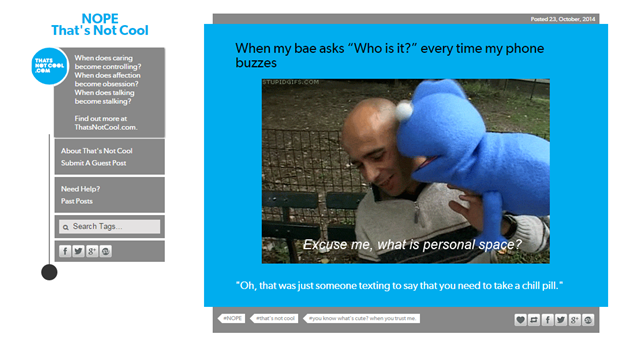 This year for Teen Dating Violence Awareness Month, we designed a teen-focused graphic and asked young people to share it with their Facebook and Twitter friends. By simply setting the logo as their profile picture during the month of February, teens can take a stand against dating abuse. While it might seem like a small gesture, these types of actions make teens feel like they are part of a movement, and empowers them to further engage with the cause.

4. Give Teens a Digital Toolkit.

That’s Not Cool created a toolkit that contains easy ideas for activities, mini campaigns, and events all in one place—from scripts for miniskits to iron-on images for t-shirts. The toolkit is available online and can be easily shared via email and social media, providing access to dozens of resources and ideas teens can use to plan events on the ground in their schools and communities that combat dating abuse. 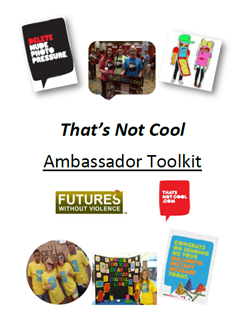