Group of Senators Are Concerned For Immigrant Survivors

On July 18, 2017, a group of Senators stood up for immigrant survivors of domestic violence, sexual assault, trafficking and other serious crimes. In a letter to U.S. Department of Homeland Security Secretary John Kelly, 24 U.S. Senators expressed concern that recent actions by the Department threaten critical protections for immigrant survivors—the protections we’ve fought hard to win and defend. 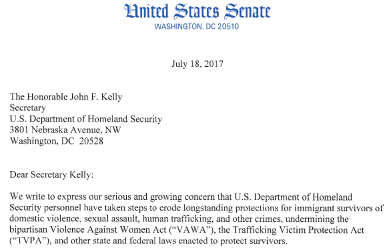 Congress recognized the importance of making immigrant survivors feel safe to come forward and report abuse to local law enforcement. The Violence Against Women Act and the Trafficking Victim Protection Act include life-saving protections that help ensure abusers can’t use an individual’s immigration status as a tool of control and abuse. Previous U.S. Immigration and Customs Enforcement memos instruct ICE personnel to minimize the impact immigration enforcement might have on immigrant survivors’ and witnesses’ willingness to come forward and call the police.

But now, new immigration policies threaten the progress we’ve made. Stories from around the country indicate that survivors of rape, sexual assault and domestic violence are afraid, more than ever, to call the police or go to court to seek the legal protections to which they are entitled such as orders of protection.

In the letter, the group of 24 Senators requests information from Secretary Kelly to clarify for the public how the Department’s policies related to immigrant survivors of domestic violence, sexual assault, human trafficking, and other serious crimes have changed in recent months and urges the Department to consider the impact any new policies will have on immigrant survivors’ access to justice and safety. “Survivors of domestic violence, sexual assault and trafficking often face extraordinary barriers to escaping abuse and any efforts by DHS, ICE, or CBP should be carefully thought out to make sure they do not discourage reporting or enable abusers to continue their abuse.” We agree and applaud this effort to clarify the Department’s position on these issues.

You can read the letter HERE.