Driving Awareness of Human Trafficking, At Home and Abroad 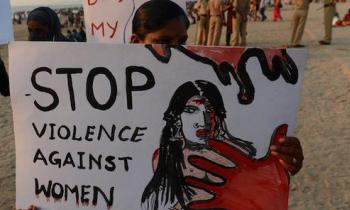 Unfortunately, for millions of women and girls across the globe who are trafficked, this sense of freedom and hope is not possible. In addition to being the first month of 2016, January is also National Slavery and Human Trafficking Prevention Month—a national awareness building initiative to shine a light on the dark, often covert world of human trafficking.

According to the International Labor Organization, Human Trafficking― which includes commercialized sexual exploitation, forced labor, and domestic servitude―affects 20 million people around the world. Of those abused, 55 percent are women and girls, and 26 percent are children. Human trafficking is modern-day slavery. It involves people being bought, sold, and forced into slave labor or sexual exploitation.

It’s a rampant and very real issue that women and girls throughout the world face every day.

That’s why FUTURES seeks to address the issue at all levels—through public education, policy and legislation, and research—to prevent the trafficking of women and girls and help victims not only survive, but also thrive. We’re calling on the U.S. government to make a financial commitment to end human trafficking and proposing legislation that makes the prevention of global gender-based violence and trafficking part of our nation’s foreign policy.

While human trafficking abroad has been more heavily covered in the media in recent years, it’s a devastating and thriving industry here in America as well, with many of its victims being runaway and homeless youth.

An estimated 1.7 million youth are homeless in the U.S. In every community, youth run away from home or are kicked out, become orphans, or exit the juvenile justice or child welfare system with nowhere to go―making them susceptible to abuse, including trafficking.

That is why, domestically, FUTURES is supporting the re-authorization of the Runaway and Homeless Youth Act. The Runaway and Homeless Youth Act enables community-based organizations to provide homeless youth with crisis intervention housing, basic life necessaries, family interventions, and longer-term housing options. It’s the only federal grant program dedicated to supporting homeless teens, but has not been reauthorized since 2008 and is stalled in the Senate Judiciary Committee.

This National Slavery and Human Trafficking Prevention Month, let’s help ensure that every woman and child has the freedom and opportunity to thrive. Take action by spreading the word about human trafficking with your network, supporting FUTURES to help make the prevention of human trafficking a U.S. policy priority, both at home and abroad, and urging your Senators and House Representatives to support the Runaway and Homeless Youth Act.