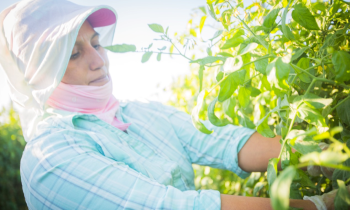 Guest blogger Guadalupe Gonzalo is a Coalition of Immokalee Workers (CIW) staff member who has worked in agriculture for over a decade in tomatoes. CIW is featured in the upcoming documentary Food Chains, which highlights the importance of fair wages in the prevention of exploitation and abuse. Food Chains premieres nationwide starting November 21—check your local listings now!

History is being made in the tomato fields of Florida.

In the past, as women in the fields, we used to face sexual harassment on a daily basis.  When we reported these abuses, the first thing our bosses would do was simply to fire us. Basically, as women, as mothers, as human beings, we never had the opportunity work with dignity.

For years, we were prisoners to this norm:  No matter where you worked, the threat of sexual harassment was always present.  In theory, women were supposed to have rights, just as men did, but before, it was always the rule of the stronger.

But today, thanks to the Fair Food Program, women have begun to see a small ray of sun, illuminating our lives. We are able to make a better wage— but most importantly, we are treated with dignity and respect. 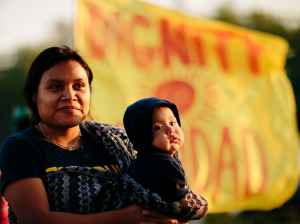 For us, dignity is the acknowledgment of the basic worth of a human being.  Today, with the new day that has come to the tomato fields, not one supervisor or crew leader is allowed to speak abusively to workers, to make us feel small or insignificant.

To be a woman does not mean we have to accept what is said to us.  To be a woman means that we have the right to live in a better world, without sexual violence and other abuses, with our heads held high.

As women farm workers and as fighters, we are going to defend our rights, with strength and heart.   We’re going to continue fighting so that the large corporations like Publix and Wendy’s support the Fair Food Program, and together, make the lives of women even better.

So we invite you to see the film “Food Chains,” so that you can learn how women and men have been able to transform the fields in Florida into a 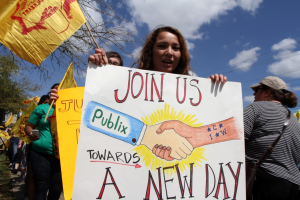 We also hope you will join us in the fight for Fair Food.  As farm workers and consumers, we are deeply connected, and we cannot allow these large companies that continue to resist change to take advantage of us or divide us.  My struggle is your struggle—we are all human beings, and we all deserve respect.

As workers, we don’t have millions of dollars to put ads in televisions—but we have honor, we have dignity, and we carry the truth on our lips.

FUTURES is proud to partner with the Coalition of Immokalee Workers  for the Low Wage, High Risk Pilot Site Project to identify best practices to protect service workers from conditions that give rise to domestic and sexual abuse, and beyond.