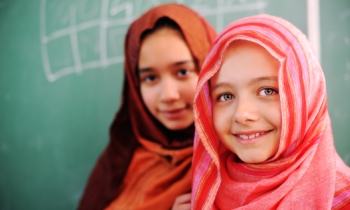 This is the third post of a series highlighting the topics, speakers, and participants featured during FUTURES’ 2015 National Conference on Health and Domestic
Violence. Today’s guest blogger is Kendra Tappin, a Denise Allen International Policy Fellow at FUTURES. Kendra is a leader advocating for women, children, and families. For the past ten years Kendra’s work has focused on social inequality, and she has addressed issues of race, gender, resource distribution, education, and public health.

Today, International Human Rights Day, marks the end of the 16 Days of Activism Against Gender Violence.

There have been many moments when the bravery of those affected by sexual or gender-based violence and those working to end that violence have created positive solutions. Though there are far too 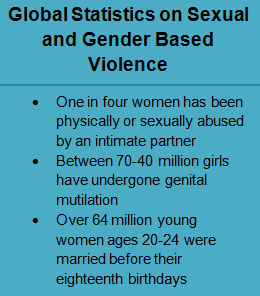 many stories to share here, I am reminded of the recent viral video showing sisters, Aarti and Poojah Kumar, thrashing two men who harassed the girls while they were travelling on a public bus in Haryana state, India.  The video sparked a social media frenzy that gave the girls widespread support, and ignited a public conversation about public responsibility in responding to sexual and gender based violence.  Powerful moments like the one in Aarti and Poojah’s video leave an indelible mark in the global consciousness about sexual and gender-based violence, and strengthen the tide pushing us toward change.

Globally, one in three women will be beaten in her lifetime. As will one in six men. The specter of this violence knows no cultural or political boundaries. It haunts in times of war and in times of peace. The everydayness and everywhereness of this violence suggests there are many possibilities for research, collaboration, and action.

The 2015 National Conference on Health and Domestic Violence highlights the latest research and most promising practices to address sexual and gender based violence both internationally and domestically. “Millennium Development Goals and Gender Based Violence: Promising Practices and Recommendations for a New Millennium Agenda”  one of the 14 Pre-Conference Institutes taking place March 19th  will highlight work and best practices in the international fight to end gender based violence.

This session will bring a variety of voices into the discussion on setting the post-2015 Millennium Development Goal agenda.  Featuring in-depth conversations with academics leading the field in research on sexual and gender based violence from the World Health Organization, directors of community based organizations and prevention projects, and staff in policy roles at various domestic and international organizations, this session will also include a discussion with federal and private funders.[1]

There will be much more on gender based violence work being done across the world at the 2015 National Conference on health and Domestic Violence with speakers discussing innovative research and promising practices from over 15 countries. We hope to see you there!