Leveraging Sports to Help Break the Cycle of Violence 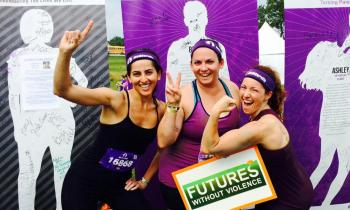 With all the negative headlines about domestic violence in professional sports, it’s refreshing to be partnered with such an empowering and inspiring athletic event like Mudderella. Women and men across the nation are participating in Mudderella to own their strong and stand up to domestic violence. Here at FUTURES, we focus on proactive solutions that not only address violence, but also help prevent it from happening in the first place.

Violence against women is not a women’s issue; it’s an everyone issue. It affects individuals, families, and communities. Men and boys play a critical role in helping to end domestic and sexual violence. At Futures Without Violence, we’ve developed a program called Coaching Boys into Men, which provides high school athletic coaches with the resources they need to promote respectful behavior among their players to help prevent relationship abuse, harassment, and sexual assault.

Coaches are uniquely poised to positively influence how young men behave both on, and off, the field. As Coaching Boys into Men supporter and Duke University Head Coach Mike Krzyzewski explains,

“[the program] provides a great platform for teaching young athletes that the aggressiveness that works in a game has no place in their relationships with women.”

Check out this video of the South Portland High basketball team reading the Coaching Boys into Men pledge:

Sports and athletics can often be used as a starting point for opening up a dialogue about healthy relationships. Earlier this year we launched a campaign called Teach Early with the Ad Council to encourage role models to talk to boys about violence against women.

We’ve received incredible responses from the community. Skater Tony Hawk and former NFL player Howie Long even sent in some throwback photos of how they strived to “teach early.”

Muddrella is an incredible opportunity to shine a light on domestic violence, and empower men and women to speak out against abuse. This Domestic Violence Awareness Month, we’re grateful for the opportunity to team up with Mudderella. Together, we can help women across the nation to overcome obstacles and own their strong!