Unable to Leave: Economic Sabotage and Exploitation in Abusive Relationships 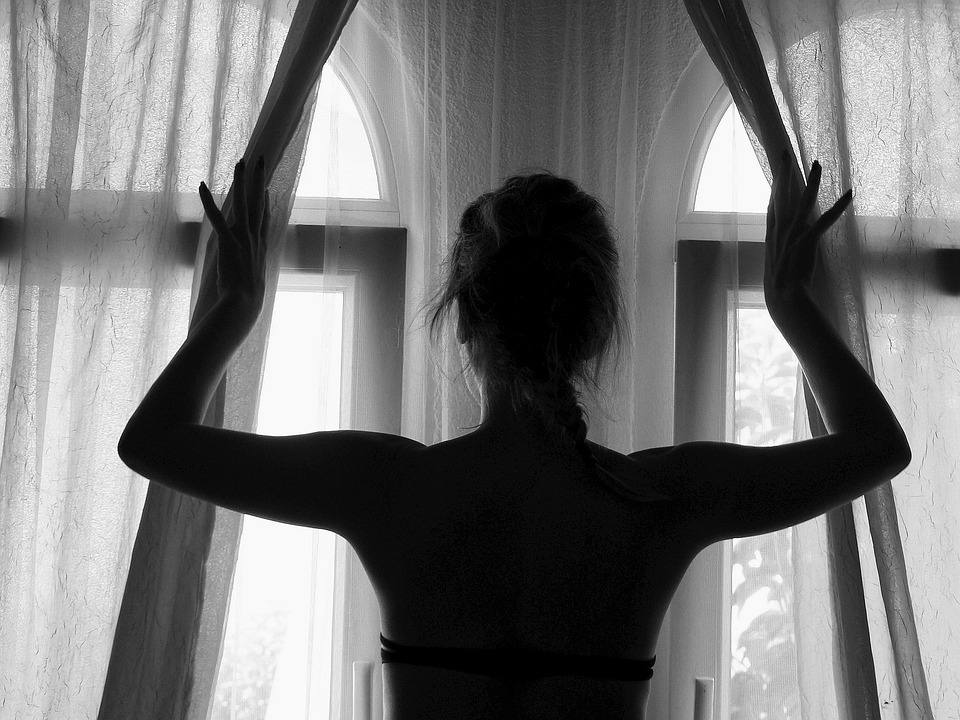 Inevitably, when I share with an acquaintance that I work to end domestic violence, I am met with the response, “Well, why doesn’t she just leave?”

In my experience, the answer to this question is: “Because she can’t afford to.”

Survivors I have spoken with often share common stories about how their partner caused them to lose a job, sell their possessions, or caused them to generate thousands of dollars in credit card charges in their name – leaving them with limited job prospects, no resources, and crushing debt. Domestic violence is about power and control. And often there is no better way to exercise power and control over another person than by sabotaging their economic well-being. The impacts of economic abuse are devastating to both the immediate and future welfare of survivors and their children.

While those of us working with survivors recognize the economic harms survivors bear, research to help quantify the scope of these harms has been limited. Fortunately, the Economic Security for Survivors Project at the Institute for Women’s Policy Research, in collaboration with the U.S. Department of Justice’s Office on Violence Against Women, conducted a survey to gain a deeper understanding of the effects intimate partner violence has on the economic well-being of survivors. The findings are alarming, and the connection between economic security and safety, undeniable. 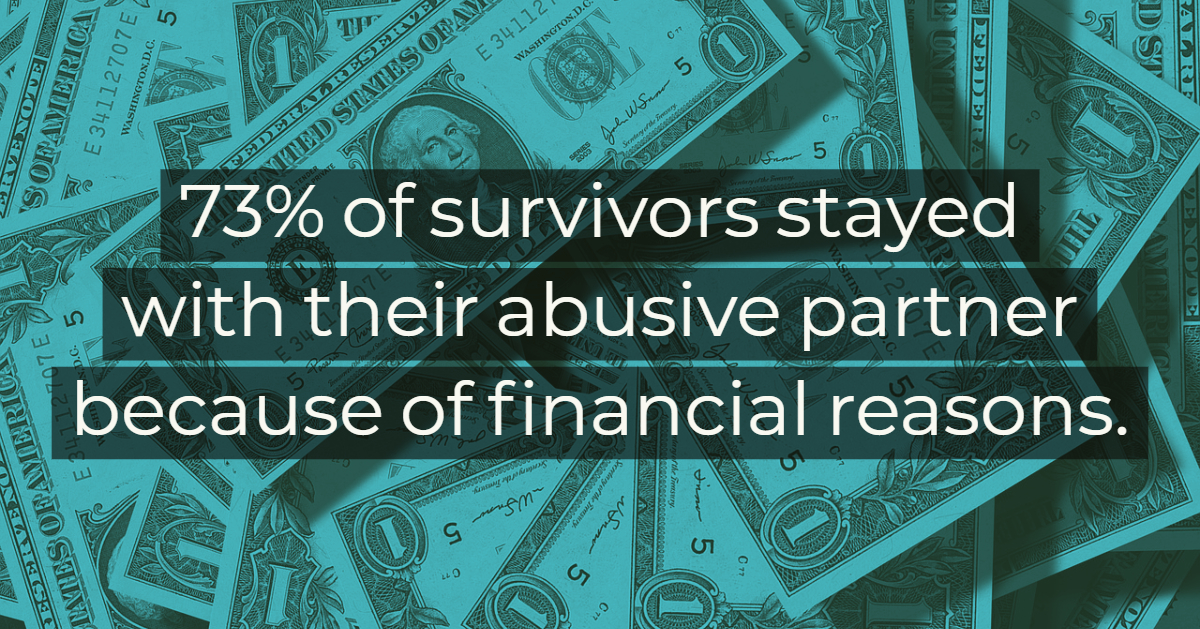 The study found that one in four (73 percent) survivors stayed with their abusive partner because of financial reasons; more than half of these survivors indicated that they stayed at least two years longer than they wanted. That is two more years of abuse and injury that these survivors felt they had no other option but to endure – two additional years while they tried to hide away the resources needed to escape (survivors like Lori, who hid change in tampon applicators.)

From sabotaging survivors’ ability to gain economic independence by disrupting educational and employment opportunities, to exploiting survivors’ financial resources, the study documents how abusive partners use economic abuse to entrap and control. Two-thirds of survivors reported their partner’s behavior negatively affected their ability to pursue and complete educational and job training opportunities.

The impacts on employment are equally devastating.

In addition to economic sabotage, economic exploitation is another common tactic abusive partners use to maintain control. Seventy-three percent of respondents said their abuser took money from them – some of whom reported that their partner stole more than $35,000. More than eight in ten survivors (82 percent) said their abuser damaged, destroyed, or took their personal property. In addition, 59 percent reported that their partner negatively impacted their credit, which prevented them from qualifying for housing and loans necessary to find independence. 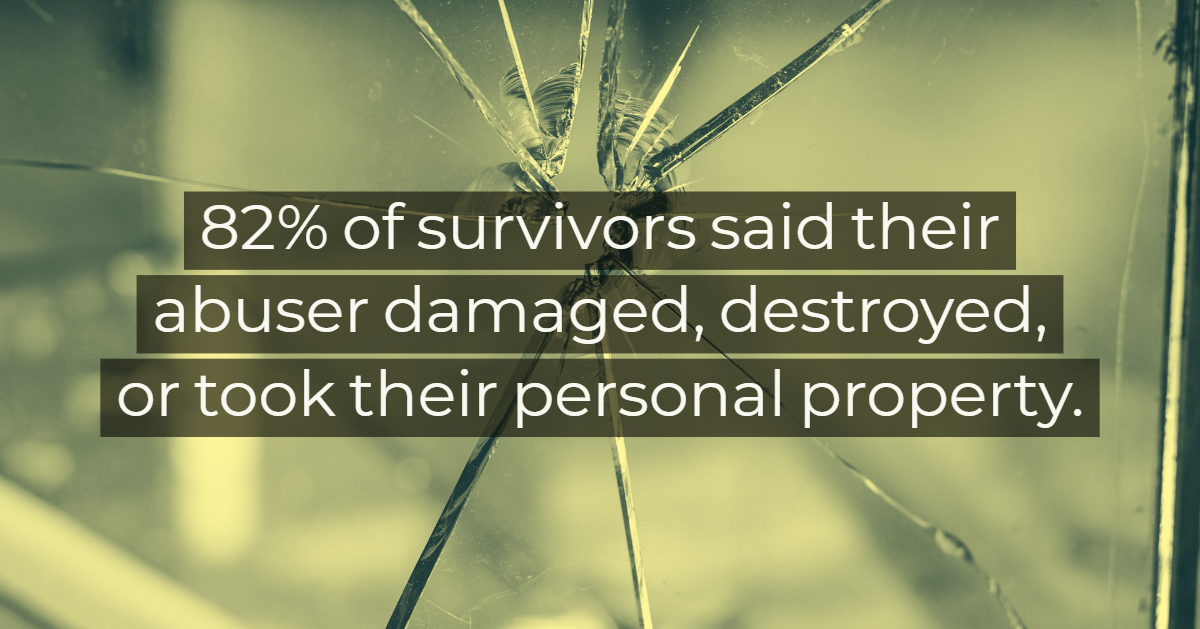 These costs and consequences cannot be underscored. Having no option but to remain in abusive relationships exposes survivors to increased risk of physical violence – even death. For those who ask the question, “Why doesn’t she leave?” – data makes it clear that economic protections and supports are critical for survivors to be able to achieve safety.

We must help to build, protect, and restore survivors’ economic security.

Educational institutions and workplaces should have policies that support survivors and provide reasonable accommodations that allow them to advance in their vocation or maintain their employment without incurring additional costs, jeopardizing earnings, or risking job loss. Survivors, as consumers, need stronger protections and remedies to allow them to recover financial losses – many of which are economic crimes perpetrated against them from theft, damaged property, or credit card fraud. Finally, survivors simply need access to flexible financial assistance to allow them to take the steps necessary to break free from an abusive partner, establish independence, and secure lasting recovery.

Economic security equals safety. When considering the high cost of the status quo, we have to respond by advancing laws, policies, and protections that support better economic outcomes for survivors.

[i] The College Board. Average Published Undergraduate Charges by Sector and by Carnegie Classification, 2017-18. https://trends.collegeboard.org/college-pricing/figures-tables/average-published-undergraduate-charges-sector-2017-18. Author calculation, assumes eight courses per year.