Earlier this week, the Bureau of Justice released a comprehensive study on the prevalence of college sexual assault, incorporating responses from 15,000 women and 8,000 men from nine schools across the United States. It confirms what we already knew: sexual assault on college campuses is a very serious issue that can’t be ignored. The federally-funded study echoes previous research demonstrating that as many as one in four women experience sexual assault and abuse during their college years. Despite outrageous and unfounded claims aimed at debunking this statistic and perpetuating the cycle of victim-blaming, it’s clear that there is a very real problem at our nation’s universities.

While the prevalence of college sexual assault may not come as a surprise to many familiar with the topic, we found the most alarming revelation of the study was that a majority of students who have been sexually assaulted never report it to law enforcement or to their schools. The question is: why?

Digging deeper into these data points paints a clearer picture of the climate on college campuses and our society at large.

The figure below depicts the highest-ranked reason across the board. Hands down, with a clear and present lead: “did not want action taken/not serious.” This is followed by: “others might think you were partly at fault.” These findings provide incredibly telling insight about how our society treats victims of sexual abuse. Instead of reporting sexual abuse, many women and men often blame themselves for what happened to them. This is a notion that is perpetuated and echoed by our society—in media, on Twitter, in daily conversations, and throughout our legal and justice systems. And it needs to change. 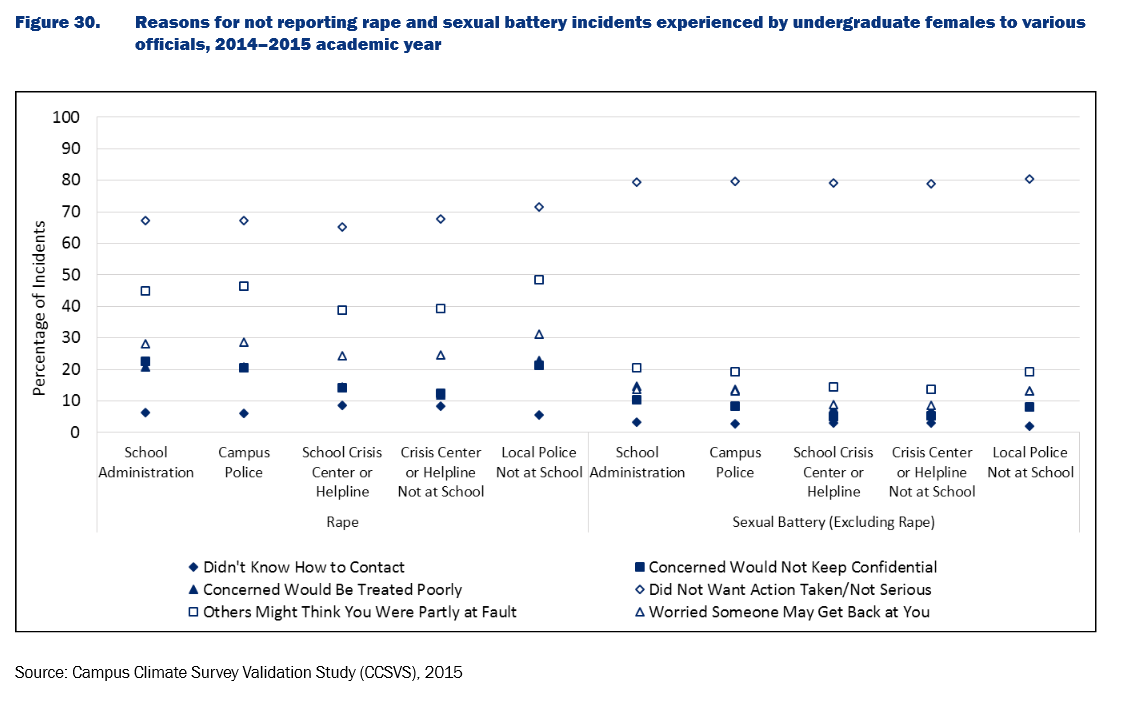 According to the study, most victims told family or friends about the abuse; but only four percent reported to law enforcement and only seven percent reported to their school. The issue is more nuanced than simply underreporting. Survivors are reporting to friends and family in a majority of cases—which can help them feel supported, safe, and heard. Unfortunately, this type of peer reporting does not always provide the recourse needed to bring perpetrators to justice, hold universities and the legal system accountable, and create a pathway for change. Family and friends of those who have experienced abuse are in a unique position to help shatter the cycle of victim-blaming and empower survivors to come forward.

Instead of making women and men feel isolated and at fault for their abuse, we must believe and support them, and ensure they get the help they need.

Schools and law enforcement must create survivor-centric and trauma-informed systems that encourage reporting. We must empower survivors to step out of the dark and take recourse, rather than shaming them into feeling like they drank too much, sent the wrong messages, or did something to incite the abuse.

The takeaway from this study is not that college sexual assault is a prevalent and rampant issue. We already knew that. The real takeaway is that we all have a role to play in changing the status quo that has kept victims and survivors of abuse quiet for so long.  Campus presidents need to take a stand and transform the culture of their campus so that survivors are not afraid to get help. Students need to put pressure on their school’s administration, be an up-stander when they see something that’s not right, and play an active role in promoting a culture of respect on campus. And friends and families need to support and empower survivors who come forward about sexual abuse, and reinforce that it’s never their fault.