You’re Never Too Old to be Treated with Respect 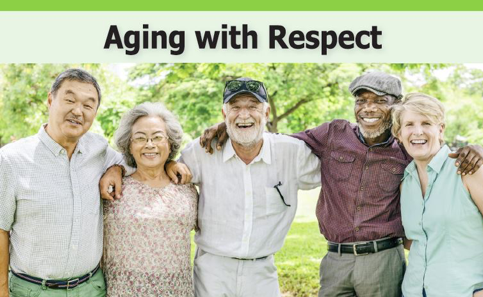 One in ten older adults report being abused, neglected or exploited by someone they know, such as a spouse, partner, family member, or caregiver [1]. Yet, many victims aren’t connected with social services or other avenues of support that can help them [2]. Health care providers and aging services program staff can play an important role in talking to patients about abuse in later life, including healthy and unhealthy relationships between their spouse, partner, family members, friends and caregivers.

The good news is that now there’s a resource that can support this work.

Futures Without Violence recently partnered with National Clearinghouse on Abuse in Later Life (NCALL), to create a patient education tool called “Aging with Respect.” This tool helps providers build connections with their patients via talking with them about what it means to have healthy relationships.

The geriatricians using our evidence-informed intervention and this tool have already begun seeing meaningful impacts. One geriatrician in Southern California shared this story:

This patient lived with a younger man who helped with errands and odd jobs around the house. The provider reviewed the “Aging with Respect” card with the patient and talked about healthy relationships, kindness, and respect. The patient became tearful and revealed that sometimes the young man would get short with him, and make him feel badly about himself. He denied any bodily harm. This conversation, prompted by the card, triggered the provider to speak more about the patient’s concerns at home and also to make sure they added continued social work support as part of the patient’s return to community plan.

This patient’s situation had not previously raised any concerns, and they only came to light when the card was employed. This experience provided proof that this card can be a powerful tool in helping providers connect with seniors in transition, and reveal information useful in their care.

The National Health Resource Center on Domestic Violence (HRC) has made this resource available online, order it now for your practice or program!

To learn more and find a list of resources for your patient or client: www.futureswithoutviolence.org/elders

The HRC is funded by a grant from the Family Violence Prevention & Services Program, Family & Youth Services Bureau, Administration for Children and Families, U.S. Department of Health and Human Services, and is a member of the Domestic Violence Resource Network.

A special thank you to our advisory committee who helped develop this intervention: