#MarchForOurLives: A Watershed Moment in the Movement to End Violence 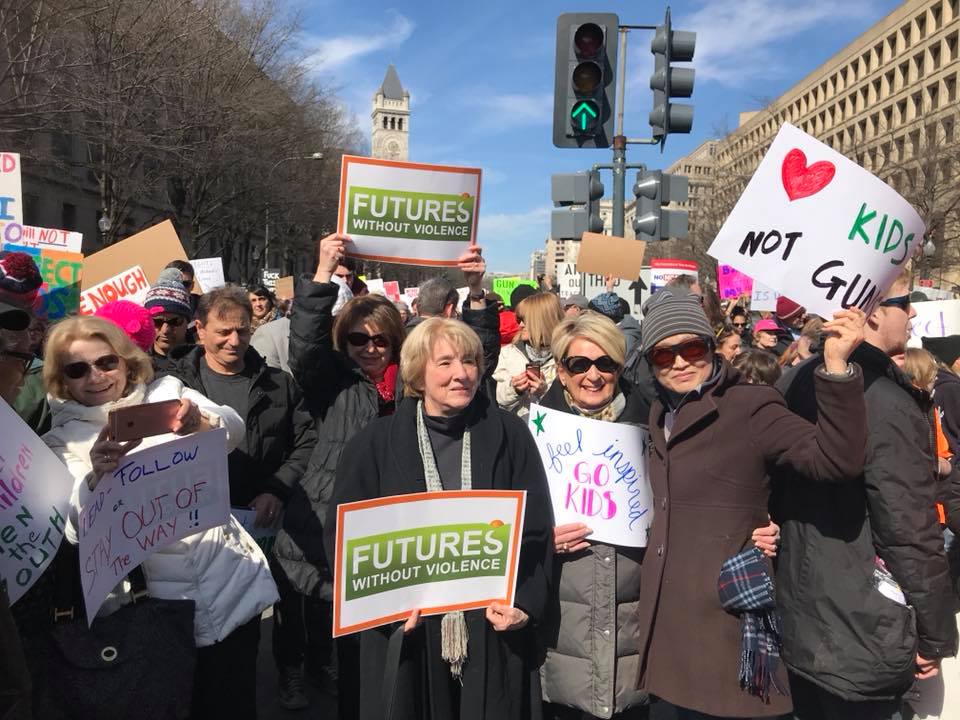 As the Millennials among the FUTURES board members and staff who attended the March for Our Lives, we stood with our nation’s top activists, researchers, public relations gurus, judges, lawyers, business executives, diplomats, and financiers. Our colleagues span all generations and movements, but we have all dedicated their lives to ending violence against women and children.

But this day was about the students, who in the words of Marjory Stoneman Douglas student Alex Wind “were the only people that could have made this movement possible!” Eleven-year-old Naomi Wadler went on to strike a chord central to our work, speaking on behalf of “the African-American girls whose stories don’t make the front page of every national newspaper.” Since women of color and low-paid workers experience gender-based violence and exploitation at strikingly disproportionate rates, we were encouraged that so many #MarchforOurLives student speakers addressed the intersectionality of violence.

Moments become movements. And FUTURES is delighted to support students nationwide who have catapulted a watershed moment into a groundbreaking movement to make our country safer for all.

FUTURES board members, staff, and friends show off their posters before the March for Our Lives.

As an advocate for women who were victims of violence, FUTURES’ President & Founder Esta Soler tells the story of going to emergency rooms in the 1980s and seeing women who were beaten, with broken noses, fractured wrists, and swollen eyes. Using a Polaroid camera, Soler would take the survivor’s picture and give her the photograph as the evidence she needed to go to court. These photographs, which made “what was invisible, visible,” crystallized the moments that became the social movement to end violence against women and children.

The grave connection between domestic violence and firearms is undeniable. Nearly 1 million women alive today have been shot, or shot at, by an intimate partner.[i] Moreover, for women physically abused by their partners, the risk of homicide increases five-fold when the partner owns a firearm.[ii] Most mass shootings arise from domestic violence: 54% of mass shootings from 2009–2016 included the shooter’s current or former spouse or intimate partner, or another family member.[iii] Lives are saved when firearms, especially high-capacity magazines, are kept out of the hands of perpetrators of domestic violence. In states that require background checks for all handgun sales, there are 46% fewer women shot to death by intimate partners.[iv]

Although the Polaroid has been replaced by mobile devices and hashtags, the importance of capturing and seizing a moment is no different. That is why we are so inspired by #MarchforOurLives. Our hearts were broken when we heard young voices share heart-wrenching stories of their trauma, making their invisible pain, visible. These youth are making the case, and we know that everyone at FUTURES is committed to that through and through. Their resiliency has reminded us that it is never too early to speak out against injustice and fight for safer futures. We are inspired and motivated to take their strength and bravery back to our work for futures without violence and greater opportunities for all.