Today is International Women’s Day, a time to celebrate and support the empowerment of women across the globe.

It has been a big year  here at FUTURES. High-profile cases of domestic violence in the NFL has sparked a national dialogue about gender-based violence and shined a light on the violence that takes place in homes across the country and globe. Professional sports leagues are finally starting to make major changes in the way they deal with domestic abuse within the organization.

While great strides have been made to prevent violence against women, there is still a long way to go. Globally, it’s estimated that one out of every three women worldwide will be physically, sexually, or otherwise abused during her lifetime—with rates reaching 70 percent in some countries. Gender-based violence—from early and forced marriage to domestic violence—devastates lives and impedes women and girls from reaching their full potential.  We can’t be committed to ending gender-based violence at home, while turning a blind eye to these human rights abuses throughout the world. 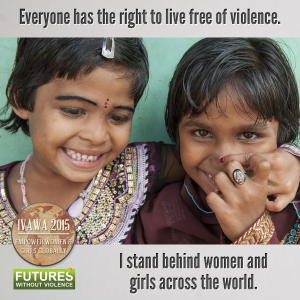 That’s why we’re so pleased to announce that the House of Representatives reintroduced the International Violence Against Women Act this week to help prevent violence against women and girls cross the globe. The best part? The bill was reintroduced with unprecedented bipartisan support, and the Senate is expected to follow suit next week.

As our founder Esta Soler says, “movements are made of moments.” (More on this in her TEDTalk—don’t miss it!) This is one of those moments. This International Women’s Day, let’s celebrate the successes that have helped move the needle toward a world free from violence. Let’s also be sure that in the coming weeks and months we let Congress know that we care about women and girls throughout the world. Tell them that you support the International Violence Against Women Act.